Let's not dwell on Trivialities

The Debate Over President Mugabe's Visit to

During the course of this week, the Zimbabwe Advocacy Office in Geneva (ZAO), has received several media requests to comment on the controversy surrounding the invitation of President Robert Mugabe to attend the ITU TELECOMMS Summit in Switzerland, particularly in the wake of the scandal involving the now-terminated business dealings between Nestlé's Zimbabwe subsidiary and the Mugabe family.

We therefore issue this statement to express our views on the matter. The ZAO accepts the position of the International Telecommunications Union regarding UN protocol under which all Heads of States and Governments are invited to the global body's events regardless of

their human rights record. Even though President Mugabe and about 213 other members of his party are under restrictive travel, financial and arms trade measures imposed by the Swiss Federal Government and the EU, the people of Zimbabwe themselves are not under any international sanctions. We therefore take no issue with the ITU or Swiss government allowing President Mugabe to travel to .

However we deplore any attempts by government leaders to abuse United Nations and other multilateral platforms as avenues for political grandstanding and evading international restrictive measures. Whilst President Mugabe predictably used this opportunity to rail against Western 'sanctions' and independent media in Zimbabwe, long-suffering Zimbabwean families would derive no economic benefit whatsoever from this latest international presidential trip.

It is more critical to point out that the policies and mismanagement of national wealth by members of the ZANU PF-led government have directly led to the economic collapse in the country which is being further jeopardised by ZANU PF's reluctance to implement the 2008 Global Political Agreement in earnest. There are only 2.8 telephone lines for every 100 Zimbabweans and only 1.1 internet hosts for every 1'000 Zimbabweans. On top of this the government continues to monopolise the airwaves, maintaining laws and structures that inhibit the freedom of independent Zimbabwean media organisations and entrepreneurs to practice their trade at home and broadcast to the nation.

Recently President Mugabe's party demonstrated its lack of commitment to genuine democratic reforms when irregularly appointing 8 retired military personnel and other loyalists to various media commissions and boards contrary to the spirit of the Global Political Agreement. The continued use of hateful and intolerant language in public discourse and the use of 'war' language by the chief of the Zimbabwe National Army in relation to Zimbabwean internet media organisations broadcasting from abroad are also major causes for concern.

Following almost a decade of tensions, the Government of Zimbabwe now has a clear opportunity to demonstrate its commitment to the guiding principles of the United Nations and being accepted back among the community of nations through constructive engagement and practical measures. Since independence in 1980, has not allowed even a single visit of UN Human Rights Independent Experts despite a litany of requests stretching as far back as 2000. Allowing these assessment visits to take place and perhaps offer technical support will be a welcome step in demonstrating 's commitment to working with the UN and international community towards genuine peace and reform.

debates on whether or not President Mugabe and other repressive leaders should attend UN events or not, but focus on engaging and challenging them with facts and evidence of the widespread suffering being caused by their anti-democratic rule.

The Zimbabwe Advocacy Office is an independent organisation established as a joint collaboration of the Foundation for Partnership and Development in Africa (FEPA), the World Student Christian Federation (WSCF) and Swiss-based Zimbabwean human rights defenders. ZAO is based in .

Posted by Dr Levee Kadenge at 7:48 AM No comments: 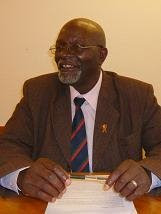